The Clarkes of Oak Lodge 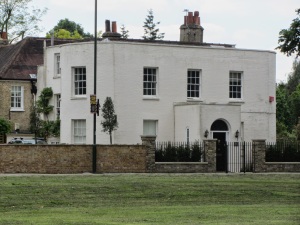 I wrote last year, in the Ham and Petersham Magazine, about two properties in Ham which were linked to the loss of more than a single individual, taking into account here, the losses sustained in one or both World Wars.  But there are others, and one of the other properties is Oak Lodge.  Ernest Parsons was employed there before he enlisted in the First World War; Sydney and Dorothy Clarke were killed when the house sustained a direct hit in the Second World War.

It was not quite the Oak Lodge you see above, because, when the war damage was eventually reinstated, the house was converted into two semi-detached houses. I’m using another view of Oak Lodge, taken by Matthew Rees, for this post, but still hope to find, and obtain permission to use, a picture of the house as it appeared before 1940.

Sydney Clarke, a stockbroker, was born in Kent in 1880.  He married, firstly, in London in 1908, Dorothy Matesdorf, the daughter of an Austrian immigrant. The couple went on to have two daughters, Clarita and Sybil, and a son, Theodore with Clarita and Theodore being named after their maternal grandparents, and Sybil after  her mother’s only sibling. (Clarita was known by her middle name, Pamela.)

In 1934 Sydney married a second time, in Dorset, another Dorothy, the daughter of Charles William Erskine Pittar and Mabel Frances Austin.  She was born in Bengal on 28 July 1900, and the family is likely to have been living in the city of Barisal, where she was baptised Dorothy Mabel Austin five weeks later.

Sydney and Dorothy were killed six days after the death of Louisa Speirs and Michael Jux. Like the four members of the Naylor family—killed or fatally injured when a bomb landed in their dining room at The Thatch, Petersham, in October 1940—Sydney and Dorothy Clarke died when a large bomb landed in their dining room on 29 November 1940, while they were having their evening meal. Their dog was also killed.  In their case, the bomb did not explode, and they were killed, according to a report in the local newspaper, “by concussion”.

Here is the account as it appeared a week later, in the Richmond and Twickenham Times.

High explosive, incendiary, and delayed action bombs were dropped in one district during a particularly heavy night raid recently. One bomb, 5ft high by 18in. wide, fell on the dining room of the house belonging to Mr Sydney Clarke.  He and his wife, who were having dinner, were killed instantly by the concussion, although the bomb did not explode.  Their dog also was killed.  Three days later a detachment of the Bomb Disposal Squad of the R[oyal] E[ngineers] removed the bomb.

Dorothy Pittar was no stranger herself to the effects of war. Her brother, Lieut. Charles Austin Pittar M.C., 1 Battalion, The Coldstream Guards, had distinguished himself in WW1 and was awarded the Military Cross in November 1918. This link takes you to a post which provides more detail about Dorothy’s brother.  Dorothy and Sydney had no children, so she was survived only by her mother, who lived until 1955.

Sydney’s son-in-law,  a Ham resident missed out on the memorial
There is a fourth serviceman associated with Oak Lodge, who is not recorded on the Ham War Memorial. I will eventually post about and record the natives or residents of Ham who lost their lives while on active service but who are not recorded on Ham’s War Memorial.

Sydney Clarke’s son-in-law, Lieutenant Commander David Byam Shaw, O.B.E., (1906–1941),  was the husband of Clarita Pamela Clarke, and the father of Ann Dalrymple Byam Shaw and Nicholas Glencairn Byam Shaw.  The Shaws lived at Holly Bush Corner, Ham Common, near Latchmere House and just a short walk away from the home of Pamela’s father and stepmother.

Hollybush Corner was also owned by the Dysarts and the 1949 Sale Catalogue records that the then tenant, Mr A.M. Symington, had a lease dating from 29 September 1941. In the case of David Byam Shaw, this indicates that the family’s move from Ham to Putney, following the death of the Clarkes, had occurred a few months before David’s death in 1941 when HMS Stanley was torpedoed.

The Byam Shaws were therefore not a resident at the time of David’s death, but I will overlook that technicality.  Here’s why. Far from rejecting Ham, and moving to Putney, which itself was certainly not as safe as Ham, it is likely that the move was an inevitable response to the family tragedy.  The mere sight of Oak Lodge, damaged and forlorn, would have triggered distressing reminders of the tragedy for Sydney’s daughter and her young children.

A bit more about Oak Lodge, post-war
Contrary to what the newspaper suggests, the house did not ‘belong’ to the Clarkes, who were tenants in the property which was owned by Buckminster Estates/the Dysarts.  It was not until May 1946 that plans were submitted for the “reinstatement of war damage” and to divide Oak Lodge into two, with the part not visible in the above photo, known thereafter as Oak Lodge Cottage.  Both properties went under the hammer in 1949.

I note that the plans were drawn up by Partridge and Daniel, the firm of architects with which Ronald Daniel was associated, and which seems to have continued to bear his name.

Margaret Frood is a Family and Local Historian with an insatiable curiosity about the partially told stories of a family's past. Her four war memorial blogs have been created in the hope that they will help to rescue from oblivion the stories of those listed on the war memorials of Petersham, Ham and Tur Langton, as well as Southern Africans commemorated in the UK and in Western Europe.
View all posts by Margaret Frood →
This entry was posted in Civilian Deaths, Ham War Memorial, Royal Navy. Bookmark the permalink.

This site uses Akismet to reduce spam. Learn how your comment data is processed.