Posted on 1 March 2016 by Margaret Frood

The parish’s first civilian deaths from enemy action, occurred on the night of 23 November 1940, when several high explosive bombs fell on Ham, one of them landing on 29 Mead Road, where Michael Jux and his parents were visiting his father’s aunt, Louisa Spiers. The Juxes lived not far from Louisa, at 158 Dukes Avenue. That bomb resulted in the death of Michael Jux and of his great aunt, Louisa (née Willis), the sister of his grandmother, Eliza (‘Lizzie’) Jux.

Louisa and Lizzie were daughters of James Edward Willis and his wife, Emma Wadlow Grimes.  Their father, a Covent Garden porter, died when Louisa, the youngest in the family, was just three years old with the inevitable consequence that their mother struggled to support her young family. The 1901 census returns hint at this, showing the youngest children in the family,  Matilda and Louisa, as boarders at Rockford House, a “Temporary School” in Cricklewood, whilst their widowed mother was in a “Temporary Infirmary” as an inmate—as distinct from a patient—at Rockhall, also in Cricklewood, with all three of them under the care of the Willesden Guardians. 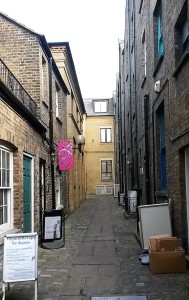 In 1903, Louisa’s sister, Lizzie, married Edward Jux in the Parish Church in Richmond, the couple giving their address as Union Court.   I cannot now walk through Union Court without associating it with the loss sustained by this family, and the double blow for Eliza, who lost both her sister and her grandson.  Not surprisingly, with her elder sister settled in Richmond, Louisa moved there from Willesden, finding employment at 54 Queen’s Road as a Domestic Nurse in the household of Harry Reynell, a retired Stockjobber.  In 1915 Louisa married Reginald Spiers, then a stoker in the Royal Navy; the couple went on to have tw0 sons, Reginald James (1916–1976) and Francis Grimes (1919–1965), and a daughter, Marguerite Louisa (1921–1986), later known as “Jackie.”

Michael’s parents were injured in the explosion which took the lives of their aunt and their son. They had to wait a considerable time before they could be dug out of the ruins, because firemen had first to attend to fire caused by a burst gas main.  Once rescued, Ernest and Dorothy Jux were taken to a local hospital.

It had indeed been a bad day for the residents of Mead Road. Another family in the street, the Newmans, also had to be dug out, after their house was hit by one of the bombs and demolished. Their daughter sustained a head wound that was serious enough to require hospitalisation.

The Vicar of Ham officiated at the joint funeral for Louisa and Michael, which took place five days later at Richmond Cemetery. Louisa and her nephew were interred there in the same grave. This cemetery may have been chosen for their resting place because of the long connection of the Jux family with Richmond.

On the very day of Louisa and Michael’s deaths, the Richmond & Twickenham Times included a report on a recent family celebration.   This happy event had been the marriage, the previous Saturday in St Matthias’s Church, of Michael’s uncle, Edward Jux “of 54 Queen’s Road”—the same address at which Louisa had been working thirty years previously—and Miss Mabel Kirby.  It noted also that Mr Ernest Jux (Michael’s father) had been his brother’s best man. Perhaps the family had been visiting Louisa that evening to share that newspaper report, or photographs taken at the wedding. Perhaps she had been babysitting for them.  And then the air raid warning sounded.

I was struck by the discovery that, on the day they died, the air raid sirens sounded in Ham for the 379th time.  Most of those warnings would have sounded over the previous three months, and anxiety in Ham would also have been exacerbated by residents’ awareness of the four civilian deaths, a month before, in Petersham.  Ham families would have been only too aware of the consequences of bombing, reinforced by the experience of the evacuees from the East End, billeted, temporarily, in Ham and Petersham, while awaiting evacuation to safer areas.

Michael was only two years old so the last few months of his short life would have been punctuated by those sirens and he may well have sensed any stress that sound evoked in others.   At that stage, he was his parents’ only child—indeed it was not until some years after the end of the war that their second son, Alan, was born.  This tragic experience and their loss of Michael was not something which, as loving parents, they allowed to overshadow Alan’s life, and they rarely mentioned it to him. He noticed, however, the reaction of his mother, throughout her life, to the sound of any siren.

Apart from the deaths of Louisa and Michael, and the injury to the Newmans’ daughter, two other families in Mead Road were affected by the loss of their children on active service during the Second World War. Corporal William Henry Burkmar had died earlier that year, on 29 May, in Belgium, while Aircraftwoman Irene Daisy Collett was killed in 1943. William’s parents lived at 2 Mead Road and the Colletts at number 26.

On Remembrance Day last year, a group of Year 6 children, including two who live in Mead Road, conducted their own Remembrance Ceremony, paying tribute to those commemorated on the War Memorial. Amongst the photographs they were shown of people commemorated on the War Memorial, was one of Michael, given to me by his brother, after our visit to the grave of Michael and Louisa in Richmond Cemetery.

Ham’s GI bride
Louisa’s daughter, still in her teens when her mother died, served in the Women’s Auxiliary Air Force. After the war, she was able to make a fresh start in America, with marriage to Steve Peter Jarett, a native of Medicine Lodge, Kansas, whom she had met in Algiers, when she was serving there with the Air Force and he with the U.S. Air Force. Her naturalisation record shows that she arrived in New York on board the Queen Elizabeth on 16 October 1947.  At that time the vessel was deployed in transporting servicemen and GI brides back to the USA.  Jackie (as Marguerite was known) and Steve married three weeks later, in Los Angeles, the city to which his sisters and their husbands had emigrated in order to work in the ‘defense plants’—presumably the wartime munitions industry.  Following their marriage, Jackie and Steve were also to make Los Angeles their permanent home, and there they raised their sons, Stefan and Keith.

Acknowledgement
Alan Jux, Michael’s brother, provided information about the effect of this tragedy on his parents, and permitted me to use the photo of Michael which accompanies this post. His interest and co-operation are much appreciated.
Information provided on the Find A Grave website, contributed by Lloyd Williams, a cousin of Steve Jarett, provided helpful information on where Jackie and Steve met.  I have attempted to contact Mr Williams, but have, so far, had no response.

Notes
According to official records, these fatalities occurred on 23 November. However, the newspaper report of their joint funeral stated that Louisa and Michael had died on Friday 22 November.  The earlier report of the raid, described it as happening “one night last weekend”. I have chosen to go by the official records, aware that almost every newspaper report on this has been either deliberately vague (with the enemy spies in mind) or unintentionally inaccurate (when reliant on hearsay).
Descendants of Louisa’s mother, Emma Wadlow Grimes, are welcome to contact me for further information about Emma’s ancestors. In the course of confirming the relationship between Lizzie and Louisa, a family reconstitution exercise was required.  I am happy to provide this information to proven descendants.

Margaret Frood is a Family and Local Historian with an insatiable curiosity about the partially told stories of a family's past. Her four war memorial blogs have been created in the hope that they will help to rescue from oblivion the stories of those listed on the war memorials of Petersham, Ham and Tur Langton, as well as Southern Africans commemorated in the UK and in Western Europe.
View all posts by Margaret Frood →
This entry was posted in Civilian Deaths, Family Members serving, Ham War Memorial and tagged GI Brides, Louisa Spiers, Mead Road, Michael Jux, Union Court. Bookmark the permalink.

This site uses Akismet to reduce spam. Learn how your comment data is processed.